In the last two years, I have seen Bitcoin gain in investor confidence. I have watched the little guy, make thousands of dollars just by holding their coins. A digital Gold Rush of sorts. The reason that I am so excited about this time. Is it finally gives the average person a way to acquire extreme wealth.

I was very curious earlier today to see when I had started purchasing Bitcoin. How much it was worth when I bought it.

Earlier today I was going through my Coinbase account. I was looking at the amount a Bitcoin was when I had purchased it. I wanted to check up on the dates. To see how much Bitcoin was worth at that time. I found a transaction done back on August 25th, 2016. The amount of a Bitcoin at that time was $577.86.

Can you even believe it? I find it hard to believe that I have been able to watch this space flourish from $577.86 to the current price that it is today. No wonder so many people Have seen the income potential with cryptocurrency.

Currently, at the time of this writing, Bitcoin is around $6,307.12. The opportunity for saving and putting money away into Bitcoin has been extremely lucrative.  For those investors that waited years for this time. Their patience has paid off. The increase in value has been like nothing we have ever seen. Even gold itself has not had this type of a gain.

The funny thing is, this isn’t even the highest amount that Bitcoin has been. According to livecoinwatch. com. Bitcoin was at its all-time high in December of 2017 when it reached $20,236.69. Bitcoin has room to grow as a tremendous asset. Currently, it has a market cap of 110 billion dollars.

The estimates in cryptocurrency in the next five years are expected to be in the trillions. Many times you will hear people say that there is not enough money. Not true at all. There is more than enough money to go around. Bitcoin has given the average person the advantage.

Never before in history Has it been so widely available to make money this easily. Anyone can invest even small amounts into this asset class.

Again, however, I must stress the importance of patience. Having the patience to sit through the good and the bad of this Market is essential. All of the newfound millionaires due to crypto had to learn this. This Market will not always be going straight up. But if you can have a realistic Outlook, you can find yourself amassing a large amount of wealth.

Just like the Gold Rush had given average people the metaphor for hope so has the new digital Gold Rush.

During the gold rush, you had to get to your location, brave elements, burglary, and starvation. Possibly you may have been lucky enough to have found gold. However, not many people were that lucky. Many walked away (or didn’t) with less than before. The new digital Gold Rush is available for anyone with an internet connection. We are now no longer limited to location or physicality. This is global. People from all walks of life and all different countries can invest and participate.

I feel that this will be one of the biggest wealth builders of our time. It has leveled the playing field for many individuals. It is why governments are becoming quite scared of its power. Any Country who does not jump on board with digital currency will only see their countries be left behind. Truthfully no country wants to see that happen. So slowly but surely they are trying to keep up with this fast-paced technology.

I am under the belief that this will run very high into the trillions. Giving way to the most significant transition of wealth that we have ever seen.

(The paragraph  below does contain an affiliate link)

Interested in getting started with cryptocurrencies? Let’s start you off with a Coinbase account. Coinbase is one of my favorite places to start. I feel that the ease of use is its strength. At the time of this writing, there are eight different coins to choose from on Coinbase. For 2019 it is rumored that they will be adding a lot more. Giving you plenty of choices to get started. 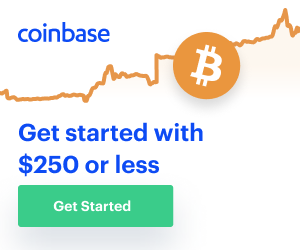 Thank You for Visiting my Site. Please visit one of our Advertisers. These are affiliate links and I do receive a slight commission.

The articles are written from my own personal experience and are intended for entertainment purposes only. I am not a financial adviser. Nothing written here is financial advice. Always conduct your own research.